Sean is 63 years old and lives in Cardiff West with his wife, Deborah.  They have been married for 39 years and have two children. Matthew lives and works in London and his daughter, Shaunagh is a nurse at Cardiff University Hospital of Wales.

Sean’s entry into politics has come late in life and is based on the strong belief he has in the importance of family, community and the need to work hard and reward those who work hard.

Sean developed these values through his background and experience. The youngest of seven children, Sean was born and raised in Fairwater.  His father, a bricklayer, sadly passed away when Sean was just 12 years old but remains, a figure of influence on Sean, having to work hard to support his family and his country. He served in the Royal Navy as a Gunner, and survived serving the North Atlantic Arctic Convoys during the war.

Due to his father’s death Sean’s childhood was not easy. His mother went out to work and held down three jobs whilst raising her young family on her own. Sean knows, therefore, from personal experience, that life can be and often is a struggle. He watched and learnt from his parents, however, that hard as it might be, you should at least try to carry on.

Alongside the skills and qualities which he developed as a sportsman, Sean has gained a wealth of experience, primarily in sales and marketing, with companies including Xerox and Canon UK. Sean and Deborah decided to become self-employed. Together they successfully opened a number of businesses in Cardiff West including the successful La Nouba Coffee House in Llandaff and Driscolls Greengrocers Fairwater Green.

Campaigners turned out in force on Thursday 26th November at Cardiff City Hall to oppose a planning application to extend Creigiau Quarry.

James Taghdissian, our paliamentary candidate in General Election 2015 explains why he is backing Sean Driscoll for Cardiff West in Assembly Elections 2016.

Election Aftermath: A Message From James

A message from James Taghdissian our parliamentary candidate for the General Election 2015.

Local businessman Sean Driscoll has been selected to fight Cardiff West at the 2016 Welsh Assembly Elections. 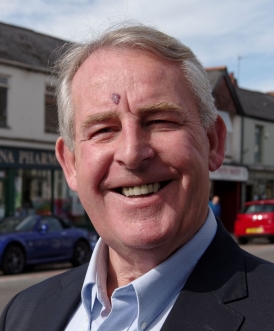